I’m whizzing silently down Seawall Boulevard in Galveston on two wheels, following a guy with a tripod-mounted spotting scope on the back of his electric bike.

Our group of half a dozen people with cameras and binoculars slung over their shoulders might look funny to some, but it’s April in one of the best places in the country to spot feathered migrants. That means birders are out in full force, and this year, I’m one of them.

I’ve made the 4-hour drive from Austin to Galveston for the 19th edition of FeatherFest, an annual festival hosted by the Galveston Island Nature Tourism Council each April to celebrate the more than 300 species make their permanent or temporary home here.

In normal years, the event features group activities and talks; due to the pandemic, the 2021 festival looked a little different. The event typically draws 650 to 750 registrants who pay $25 to sign up and then choose from a schedule of activities including photography excursions by boat and bus trips to High Island, plus a central area with a vendors and space for workshops.

“It’s an exciting hub… people getting off buses and talking about what they saw and what they added to life lists,” says Julie Ann Brown, executive director of the Galveston Island Nature Tourism Council. “Everybody is just so excited.”

I’ve signed up for two small outings led by experienced guides. Before the weekend draws to a close, I’ll prowl the grounds of the Moody Gardens where wild, jewel-colored birds are resting in trees, get an up-close look at a few exotic species inside the Rainforest Pyramid, and zip along the beach on this E-bike birding adventure led by guide Cullen Ondracek, the natural resources manager for the city of Pearland.

Galveston’s location along the Texas coast makes it a great spot to look for migrating birds each spring and fall, and we’re particularly lucky on this blustery cold spring day. The wind tires the birds out as they fly non-stop 500 miles across the Gulf of Mexico from the Yucatan Peninsula, and as soon as they make landfall, they drop into trees or shrubs to refuel and rest in what’s called a “fallout.”

Birders look off Seawall Boulevard during a birding by e-bike field trip during Featherfest 2021 in Galveston. Pam LeBlanc photo

RELATED: Fishing and sea turtles and birding, oh my: A weekend at South Padre Island

“This is the first bit of land they get to after a long flight across the Gulf,” Ondracek says, as we zoom along on electric bikes rented from Zipp E Bikes in downtown Galveston.

Birders who come here during the migration are likely to see a colorful array of migrant warblers, buntings and orioles, alongside the usual shore birds and wading birds found on Galveston’s sandy beaches. The E-bike provides a zippy new perspective.

“It’s just a fun way of getting out and birding and reducing (environmental) impact,” Ondracek says. “You’re going a lot slower and listening and hearing things you might miss.”

As we glide down the seawall, we pause to admire a bright blue indigo bunting that’s perched in a shrub, a golf ball-sized blueberry in a cloud of rust-colored leaves. Before long we spot Baltimore orioles and a rose-breasted grosbeak, too.

An indigo bunting rests on a tree branch along Seawall Boulevard during Featherfest in April 2021. Pam LeBlanc photo

I’ll admit it’s frustrating at first, though. During the first birdwatching session I attended, I found myself squinting at seemingly empty tree branches while others in the group oohed and aahed at the sight of so many birds.

It took me a half an hour to get my “birders’ eyes,” but when I began looking for movement and flickers of color instead of bird-shaped blobs, I had better luck. The long lens on my camera helped, too.

A great blue heron peers out of the brush near Moody Gardens during Featherfest in April 2021. Pam LeBlanc photo

“There’s lots of stuff falling out today,” Greg Whittaker, the animal husbandry manager of Moody Gardens, said during that session, as he pointed out the umpteenth hooded warbler, a bird so brightly painted in yellowish green that my eyes bugged out.

We prowled the outer grounds of Moody Gardens, where most visitors gaze at exhibits inside big glass pyramids. (We did spend an hour indoors, checking out gaudily-colored exotics like the blue-bellied roller, violet turaco, Bruce’s green pigeon and a blue-faced honeyeater, and marveling at six species of penguins. But that felt almost like cheating compared to our outdoor hunting.)

Mother Nature blew a rainbow of birds to Galveston’s doorstop during FeatherFest this year: yellow, Tennessee, Kentucky, blue-winged and hooded warblers, which looked like candy Skittles perched on tree branches; a family of Cooper’s hawks that left a half-eaten rodent carcass beneath a nest; pecan-sized ruby-throated hummingbirds; and an assortment of Crayola-colored species like indigo buntings, scarlet tanagers and rose-breasted grosbeaks.

A black-necked stilt feeds in a retention pond at Moody Gardens during Featherfest in April 2021. Pam LeBlanc photo

In all, Whittaker spotted 60 species during our three-hour walk. I probably saw 40, but was wowed by the variety. More than 200 types of birds live here or pass through seasonally, Whittaker said, taking advantage of fresh water in the retention ditch that runs alongside the west parking lot or landing in the restored marshes.

Before our walk ended, we’d seen a catalog of birds with names that make me chuckle, from loggerhead shrikes to lesser yellowlegs, black-necked stilts, white ibis and mottled ducks. We spotted plenty of reddish egrets, too, the de facto mascot of Galveston Island birding.

“It’s one of the birdiest places in Galveston,” Whittaker said. “Year-round we get an assortment of birds in Galveston. On the slowest day you can still get up close to 100 species.”

To prove just how birdy a place Galveston is, the Nature Tourism Council is organizing the Hotter Than Hell Birding Competition, scheduled for what is statistically the worst birding time of the year––mid-June. Teams of birders will compete to record the most species from noon June 13 to noon June 14.

An osprey searches for prey from a post along Seawall Boulevard in Galveston during Featherfest in April 2021. Pam LeBlanc photo

A great egret catches a small fish in a Galveston lagoon in April 2021. Pam LeBlanc photo

“We’re having this competition to show folks that anytime you can come to Galveston, even on the worst birding day of the year, there’s great birding,” Brown, director of the Nature Tourism Council, said. For more information, check the group’s website at galvestonnaturetourism.org.

By the end of the weekend, I’m blissfully birded out. I’ve put nearly 60 birds on the personal birding list I’ve started, I’ve signed up for the eBird smart phone ap by the Cornell Lab of Ornithology, and I’m nursing some neck muscles that haven’t been used very often.

More importantly, though, I’m noticing more of the creatures that live around me, in the trees where I’d never noticed much more than leaves. 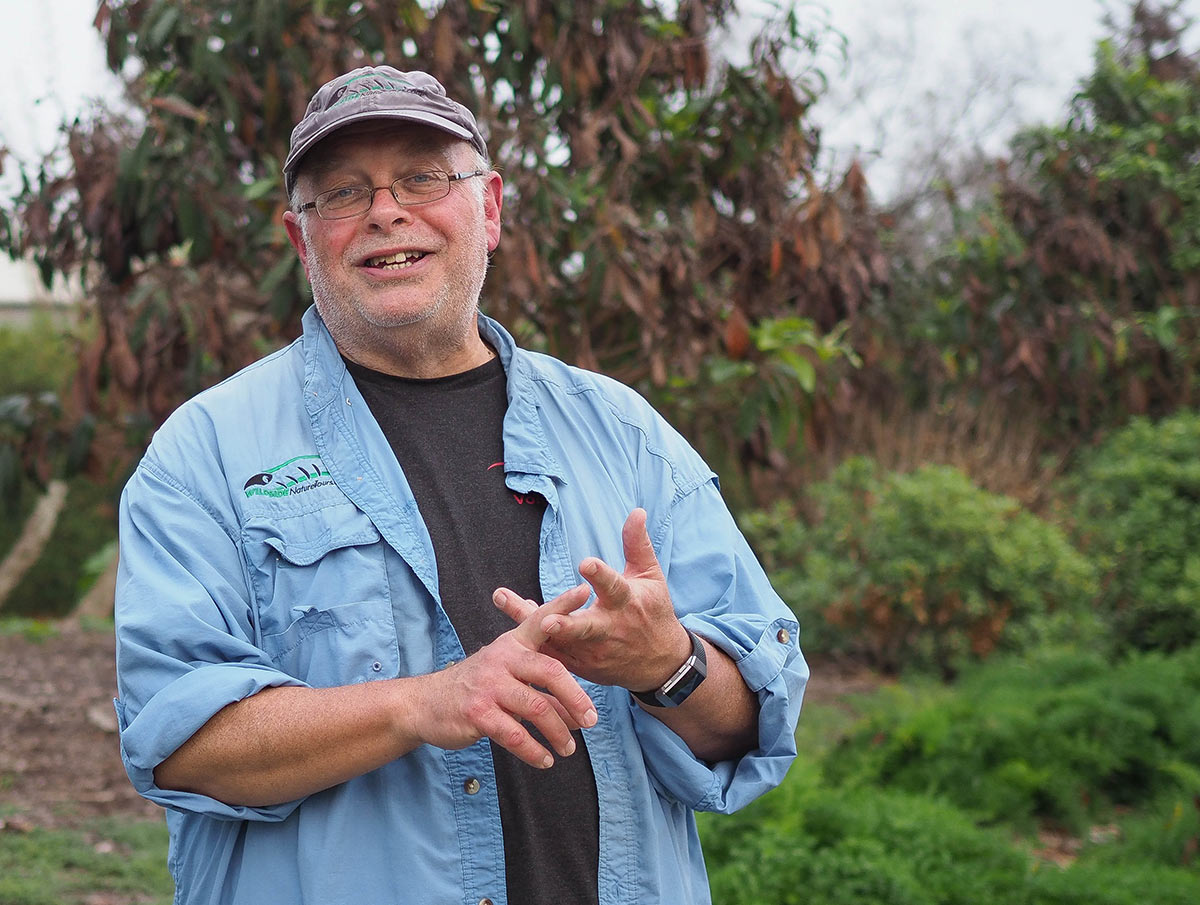 Birding in Galveston with Greg Miller

GALVESTON – Greg Miller wrapped up a day of birding during FeatherFest in Galveston earlier this month by marveling over the Blackburnian warbler he had spotted.

It’s about 215 miles from Austin to Galveston, and the drive takes about 3.5 to 4 hours.

I stayed at the Moody Gardens Hotel, but the island offers a plethora of hotels, lodges, and rental homes, from the historic Hotel Galvez to chains like La Quinta.

FeatherFest takes place each April in Galveston. Check www.galvestonnaturetourism.org for details on next year’s event.

Don’t miss Benno’s Cajun Seafood, 1212 Seawall Boulevard, for fried Gulf seafood like shrimp and oysters, as well as crawfish during season, served in a casual setting.

The birds don’t just show up for FeatherFest, and while guides are helpful, you can still see plenty of birds throughout Galveston. Try San Luis Pass, Lafitte’s Cove Nature Preserve, the East End Lagoon, Corps Woods, Pelican Island, the Oppenheimer Bird Observatory on the West End, and some of the pocket parks, like the one next to Woody’s Beach Bar, to look for birds anytime. The Houston Audubon’s nearby Bolivar Flats Shorebird Sanctuary is also a prime location.

From far flung destinations and once-in-a-lifetime

GIVEWAY TIME! It’s the most wonderful time of ye

Did you know that Australia is 11 times the size o

If you kayak into Monterey Bay, California and put